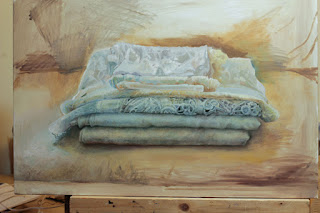 Currently on the easel
More fabrics in a pile. An exercise in whites or neutrals, a challenge of textures and a whole lot of fun to do!
It hasn’t got a title yet, but its oil and 60x40cm.

After a long break I took out my pastels again. The last pastel painting I did was ‘In the Rainbow Underpass’ (the one that got in the Royal Society of Portrait Painters!) which was a while ago, back in the early part of the year. Now we’re already rushing towards Christmas! High time to get ‘dusty’ again. I wasn’t planning on doing such a big painting, but here we go: 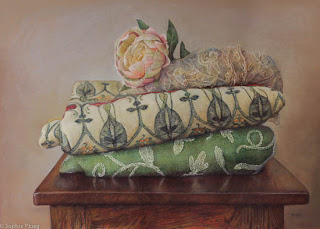 As good as finished, just a few tweaks here and there.
15 Nov: I have updated the image with the finished piece.
at November 14, 2011 13 comments:

My painting Dream has been selected for the annual exhibition of the Royal Institute of Oil Painters. I am delighted to be included in this great show. I hope you can go and visit to enjoy the world of oil painting. 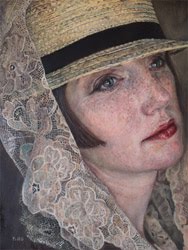 The only major national art society that is devoted exclusively to oil painting, featuring a wide variety of contemporary landscape, figurative and still-life paintings by some of the finest established artists working in oil today, alongside work by non-members. During the annual exhibition a number of prizes and awards are on offer, including the Phyllis Roberts Award of £2,000 for a promising young painter. Other highlights include the Winsor & Newton Under-35 Oil Painting Awards.

The Royal Institute of Oil Painters, also known as the ROI, is an association of painters in London and is the only major art society which features work done only in oil. It is one of the 9 member societies that form the Federation of British Artists and holds its meetings in the Federation's Mall Galleries, next to Trafalgar Square. The Royal Institute of Oil Painters, was founded in 1882, and was granted royal status by King Edward VII in 1909. The Institute is confined to about 65 elected members and includes many of the leading artists in the country. It encompasses all styles and techniques which is a tradition that goes back to its inauguration. Work for our annual Exhibition was selected on Monday 31 October and just under 700 non member works were considered for the show which opens at the Mall Galleries on 7th December . 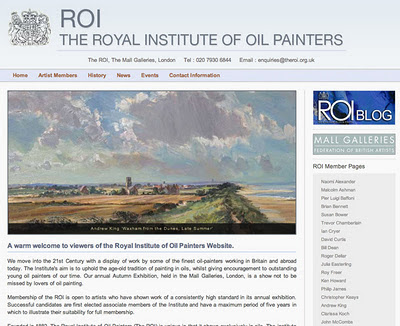