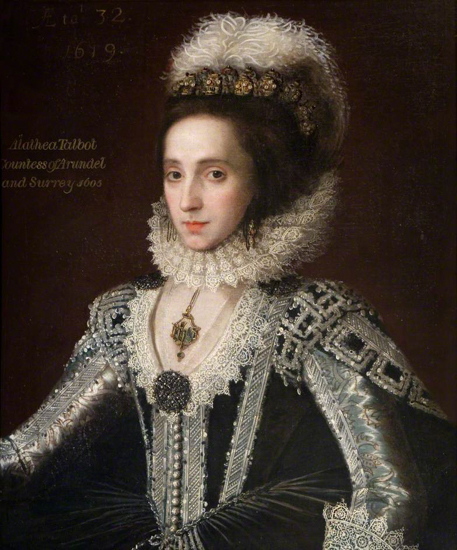 I recently came across this portrait that usually hangs in Ingestre Hall in Staffordshire but which is currently on exhibition at Wednesbury Museum, near Birmingham, as part of a small exhibition. I was interested in the portrait as soon as I saw it online and soon after decided to visit it in Wednesbury to have a closer look.

What struck me immediately was the beauty of the painting, it certainly deserves to be let out a bit more often! It was also immediately apparent that this painting belonged in the Jacobean period, as it fits in perfectly with the portraits by Larkin, Gheeraerts and others which I have looked at in the past year. The lady in the portrait is wearing typical dress of the period, with an abundance of lace, jewels, silk and feathers.

On the portrait it is written that this is Alathea Talbot (1585/90 - 1654), Countess of Arundel and wife of the famous art collector Thomas Howard, Earl of Arundel. Her grandmother was Bess of Hardwick. The writing, however, has most likely been added at a much later date and is not part of the original painting. Still the painting belongs to the collection at Ingestre Hall which is the home of the Talbot family. I do not know the provenance of the attribution or the inscription and perhaps the attribution is correct. It is very difficult to say. An original inscription states eta 32, 1619, providing us with the age of the sitter and the year of the painting.

There are two other relatively well-known portraits of Alathea known, one is by Cornelis Johnson, which is inscribed by the artist as ‘Countess of Arundel” and dated 1619 (the same year as the Ingestre portrait).


And this one by Rubens from 1620 and hangs in Barcelona. Others are known, in particular one by Van Dyck.

Most of these portraits, except the Jonson and the Ingestre portraits, clearly show the same lady. They are also surprising close in date of creation. This leaves us to wonder if indeed we are looking at the same woman. A woman who went from slim and almost skinny to a more full figure within a year raises questions. Of course it might be possible that the painter was flattering the subject, but that seems an anachronistic idea which belongs more in the 21st century than the 17th. Of course it might have been that the artist was just not very good at getting a likeness. We know very well that portraits of the same person done by master artists and lesser-skilled followers can vary enormously. But if that is the case she could be anybody.

I have read referrals to the huge IHS pendant she is wearing and a similar (but not the same) pendent that Alathea is wearing in her other portraits. This is intriguing. The Ingestre portrait shows a huge pendant, probably showing the letters IHS (the letters refer to Jesus in Hebrew) in, most likely, diamont and gold. The diamonds are painted with green, black and white paint so perhaps they could be emeralds but it seems too dark and we must assume diamonds. A similar diamond jewel we can find at the V&A. These jewels are not very common (as far as I could find) in contemporary portraits so the fact that Alathea wears a similar one in other portraits might be telling. But did she have two different ones? Did she amend it (unlikely as the dates or the paintings are so close together), did the artist not paint it correctly (unlikely as it seems to have been painted quite meticulously)  or is it simply a different jewel, owned by a different lady?

The spectacular headdress worn in the Ingestre portrait is not only rich but also painted with great care and detail. The enormous ostrich feather and abundance of jewels is also not something that common in contemporary portraits. Although we see ostrich feathers, they are usually not this large (unless they are part of a masque costume - Alathea is know to have acted in Ben Jonson’s The Masque of Queens, with costumes designed by Inigo Jones in 1609) and most caps are edged with lace, sometimes pearls, but rarely this extensively. 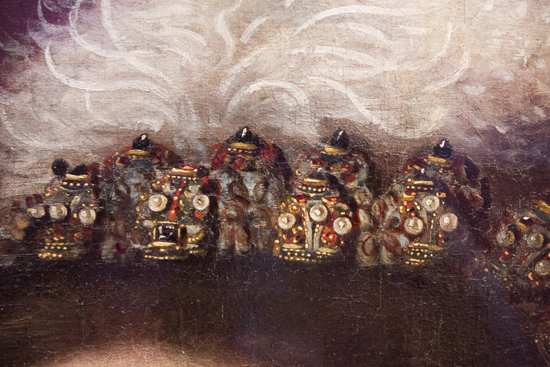 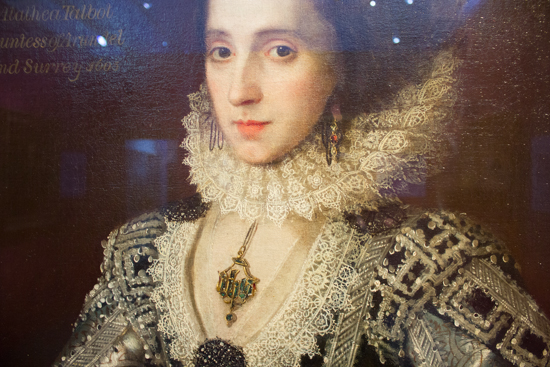 Her face, head-dress and ruff seem to have been painted with considerable skill. Although the painting is badly cracked we can still make out the subtle features of her face and the delicately painted reticella lace of the ruff (so typical of late 16th and early 17th century fashion), which fades away and upwards towards the back of her neck.
Less skill has been applied in the painting of her jacket, although from a distance it looks quite rich and impressive, a closer inspection shows either damaged paint or a slightly sloppy application. The lace on the neckline has been painted slightly skewed in an attempt to create perspective depth but which failed and just looks awkward. The lace on her cuff is mechanical and does not seem done by the same hand as the ruff. The hundreds of glistening paillettes on her costume look wonderful but lack the precision that William Larkin or Daniel Mytens would have applied. I would imagine that the body of the portrait was painted by assistants and the face, ruff and headdress by a master painter like William Larkin. Especially the way the ruff fades into the background is a method Larkin used although this of course is by no means a solid attribution - more a guess. But painters like Peake, Mytens or Van Mierevelt do not apply this technique. The soft edges of the face, the jawline and hair line all find echoes in Larkin’s work (like in the portrait of Anne Clifford).

Whomever this lady is, whether she is wearing a masque costume or not, whether she is royal or an aristocrat or not, whomever it is painted by  - it remains a beautiful painting and deserves to come out of the woodwork a bit more often. Recently she has made a trip to the Museum of London where she was included in the exhibition ‘The Cheapside Hoard: London’s Lost Jewels’ and I am grateful to Ms Forsyth for sharing some of her ideas about the IHS jewel in this painting with me.

More research is what is needed and although I am going back to my easel, I will keep an eye out for any info I can find. Who knows, maybe one day we find out the answers to all the questions this portrait raises.

The Alathea Talbot portrait is exhibited at Wednesbury Museum until 30 August. The museum is only open Thur, Fri, Sat 2-5pm. More information can be found here:
http://www.sandwell.gov.uk/wheresbill