at the National Portrait Gallery, London until 21 September 2014 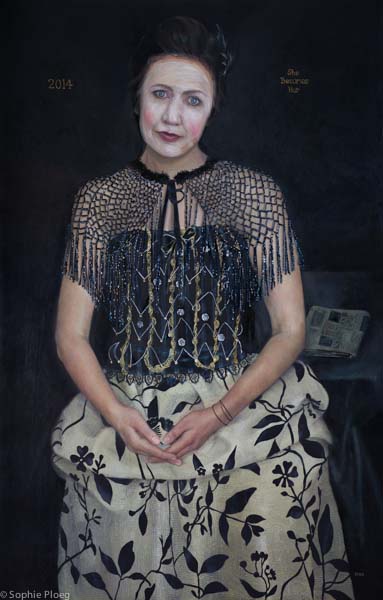 This painting was inspired by the works of Robert Peake the Elder (1551 -1619) who painted women in his typical Tudor ‘flat’ style - where there was more attention to dress than to individuality or facial features. In this painting I played with modern ideas about the way women get represented in (2-dimensional) modern media: idealised, flat and unattainable. At the same time there is a real woman behind it all (face mask). I played with 2-dimensionality (writing on the painting) and 3-dimensionality (realism).
I created the costume myself, roughly inspired by late Tudor and Jacobean fashion but with modern, antique and vintage materials. A beaded ‘flapper’ cape from the 20s, golden lace from the 19th century, reproduction tudor buttons (that don’t function as buttons) and theatrical make-up.